Windows Azure Pack (codename “KATAL”) has been released together with the R2 wave of the Server and System Center platform. Windows Azure Pack, I’ll call it WAP in this post brings Azure style self-service and automation to your private cloud.

The following picture illustrates the architecture from a high level perspective. 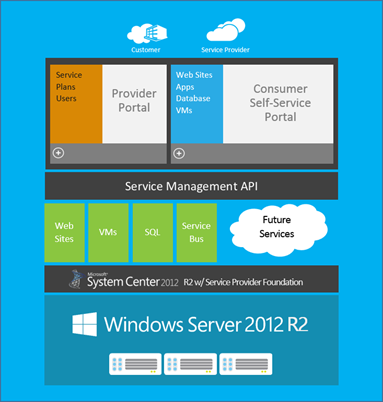 OK, you might think, but why should I have a look at it, it’s intended for service providers to deliver azure style cloud services to their customers. You’d be completely wrong!

Well if you ever wanted to enable self-service for virtual machines you probably came along System Center App Controller which enables deployment of virtual machines and services out of a Silverlight based Web Portal. App Controller is there since System Center Virtual Machine Manager 2012 SP1 and also has an interface to Windows Azure, meaning you can deploy virtual machines and services to your private IAAS or to Windows Azure from a single Web Console. Now there are some limitations to that:

Here’s where WAP can help you out. It extends your investments in an IAAS by the following functionalities:

Basic Requirements to deploy Windows Azure Pack in a PoC